Ahlem Manai-Platt doesn’t know how cool, talented, and beautiful she is, and that’s what makes her special. She doesn’t understand how, in just one year and three months, Ahlem Eyewear has earned a half-page spread in Vogue and support from superstars like Beyoncé, who recently purchased two pairs of Ahlem sunglasses while shopping in Paris. French born, LA based Manai-Platt—one of this year’s Racked Young Guns—is just trying to make it like the rest of us, but the difference is that she has singlehandedly created a brand that is changing the fashion game right before our eyes.

Earlier this week, holistic guru Shiva Rose explained that now more than ever, people want to “spend their money on items that are made with care and love, and the old paradigm of shopping in malls or buying impersonal, mass-made factory items is getting tired.” Manai-Platt answers this call perfectly, offering a range of limited-edition styles that go through a painstakingly detailed process to make, achieving a sense of exclusivity that excites today’s savviest shoppers.

We stopped by Manai-Platt’s dreamy home and studio in Venice to learn more about her serendipitous success, future plans, and feelings about Kanye West.

When did you move to LA to start your brand?

After working in the fashion industry for eight years as a buyer for Acne Studios and Prada Group, my husband and I moved here in November 2013. At the time, I had the idea of Ahlem Eyewear, but didn’t do anything with it. Then, in December I started talking with a Paris-based artisanal factory and sent them drawings of styles I wanted. They vectorized them and made a piece of plastic to see how they fit on the face, then I chose the acetate—which are either all vintage, rare acetate or from the best house of acetate in the world—then chose the lenses, and here we are!

Since you do everything yourself, including PR, how did you spread the word about your debut collection?

I still remember the day when it all began. On April 14, 2014, DHL delivered my first collection—I had no idea what I was doing until the day that I received my first stock. For me, I was just doing drawings and playing around with design, but the day that I received the final product I was like, “Holy shit, this is real!” I didn’t know what to do, so I went into my garden and looked at a list of retailers that a friend of mine told me to contact. I cold called Karina who owns C by Karina in Beverly Hills and said, “Hello, my name is Ahlem and I’m an eyewear designer.” (I didn’t know what I was doing.) “I have these glasses and would love to see you.” She told me to come in that day, so I came, and she bought the entire collection on the spot. She gave me my wings!

Same with David Gonzales, who owned Fred Segal Eyes in Santa Monica for 20 years before it recently closed. I called him, and he told me to come in right away. I came in, and he also bought the entire collection. Karina and David were the first two people I met in this country. They were my very first supporters, so I get emotional when talking about them.

Why do you think Ahlem Eyewear has attracted early success?

I think people are interested in our attention to detail, and how we focus on quality or over quantity. I don’t do fast-fashion; if you go to my factory in Paris, you will see all these artisans working slowly, but not lazy. Eight people work on one frame, and it takes more than a week to produce. It’s not about design for us because that’s subjective, but quality and detail are not subjective. We do everything in a very pragmatic way and want the best for every single detail.For instance, every style that features vintage acetate has a number etched into the temple.

People are also interested in how we release our styles. 13 new styles are released every six months, and two to three frames are introduced to the collection every three months. These new styles are in total continuity with the rest of the collection, so everything is cohesive. For vintage acetate frames, only 100 are leased of each, and that’s it.

What styles are getting the most attention?

The whole collection is getting attention, which is exciting. Teen Voguerecently featured the Pigalle, and Beyoncé purchased the St. Martin (see below) at Colette in Paris. Kendall Jenner has two of our styles: the Concordeand Bastille.

Tell us more about Beyoncé!

The buyer at Colette in Paris told me that she came in with Jay Z and ran to my glasses and picked up two pairs. No one told her anything about them, she just naturally liked them and purchased them herself.

Although I don’t think of celebrities when I’m designing, I’m so happy that they’re enjoying them. I would really love to see Kanye West in Ahlem Eyewear. I love that he has no filter and says anything he wants. He’s like a child, and I love that.

Kanye x Ahlem = YES. So, what’s next for you? Do you have plans to move into a studio or hire a team?

Right now, I like working in my home. It’s cool like this. I want to take things slow; it’s not my goal to explode on the market. Plus, we can’t do that because everything is handmade, which is very time consuming. We’ll move when it’s too tight here. As for a team, I have one assistant, Drew, but I don’t plan on hiring a PR agency any time soon because I love meeting people and talking to them myself.

Do you have plans to open a store?

We just opened a shop-in-shop at Rand+Statler in San Francisco, which will be there for a year. I’d love to launch a shop-in-shop in LA, and eventually open a permanent Ahlem Eyewear store. For now, we’re just focused on getting into more stores.

Now that you’re an honorary Angeleno, where do you hang out in LA? 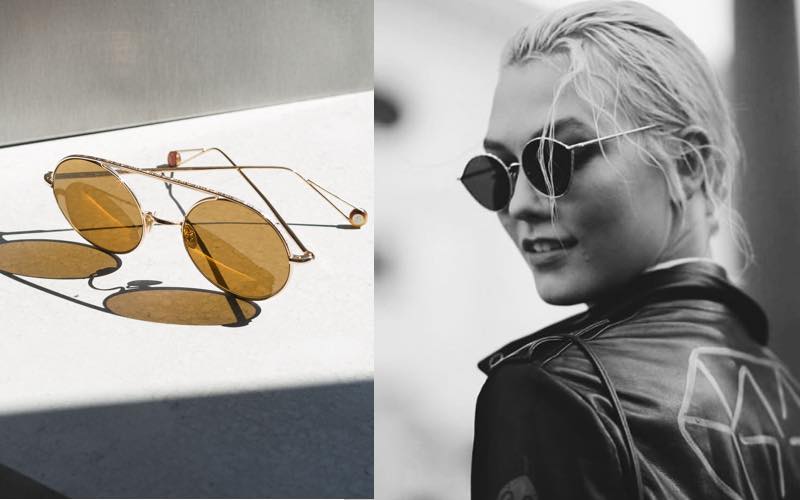